Cost: $13-15
I t amazes me that for an industry that is thousands of years old, there is always innovation going on in the world of wine.
Sometimes it’s a different grape in a region, or a new technique or a new blend. They all work to help us wine consumers find something we like. And, as is the case with the Chemistry wines, the innovations often lead to lower prices.
Oregon wines have captured the imagination of American wine drinkers over the past several years, but often we have to pay premium prices for the outstanding wines produced in the Willamette Valley. The Chemistry wines range from $14 to $20, and sometimes you can find them for a couple of dollars less.
This is a joint venture between two of the best known Oregon wineries, Stoller and Chehalem, which make excellent premium wines. Somehow they have managed to combine their efforts to produce wines for a few dollars less than their individual labels.
I love Oregon’s Pinot Gris, and I’m happy when I can find it for around $25. The Chemistry Pinot Gris has the typical flavor profile, including a hint of minerality on the finish, and it is a bargain.
The wine is a pale straw yellow in the glass with tropical aromatics. On the palate there are stonefruit characteristics with a rich, full flavor. There is just a touch of sweetness that carries through to the long, smooth finish.
The grapes were picked in October, went through fermentation in stainless steel, and the wine was bottled in April. It is not overly complex, but it is bursting with clean, fresh fruit flavors with natural acidity.
Chemistry also offers a Pinot Noir full of ripe black raspberry and other juicy red and blue fruit flavors for $19. The grapes are cold soaked and fermented in stainless steel and aged in 15 percent new oak. It is a bright, refreshing wine that is easy to sip any time.
The third Chemistry wine is a blockbuster sparkling Pinot Noir Rosé, priced at $20. It is a delightful pink in the glass, with long-lasting tiny bubbles. The wine is packed with flavors of juicy watermelon and tart strawberry. Each sip leads you to the next until you notice the glass is empty.
Chemistry says these wines are made for life’s everyday moments. They are perfect for these stay-at-home days, drinking them while you’re cooking or as you eat dinner. This collaboration is a winner.
Winery: This is an unusual cooperative effort between two wineries, made possible only because one man owns them both. The wines are sort of a closing of the circle between Stoller Vineyards and Chehalem Winery.
Owner Bill Stoller has deep roots in the vineyards. He was raised on the family farm outside of Dayton, Oregon.
After earning a business degree and an MBA Stoller co-founded a staffing company that became the largest privately-held staffing company in the world. He later founded a human resources outsource company.
All that allowed him to pursue his passion for wine.
Henry Peterson-Nedry bought his first land in the early 1980s and planted Ridgecrest Vineyards in the spectacular soil of Ribbon Ridge. He founded Chehalem Winery in 1990 and released his first wine, Ridgecrest Pinot Noir.
He was one of the first to plant grapevines in the Willamette Valley and soon many others followed.
In 1993 Stoller and his wife Cathy bought part ownership in Chehalem Wines from Stoller’s friend Peterson-Nedry. Later that year the family turkey farm that had been established in 1943 by his father and uncle ceased operation. The Stollers bought the property from Bill’s cousin and decided to plant vines.
The land was marginal for farming, but the rocky, well-drained volcanic soil was ideal for growing grapes. The Stollers planted their first 20 acres of pinot noir and chardonnay in 1995. The estate is the largest contiguous vineyard in Dundee Hills, and the wines are produced from 100 percent estate fruit.
Stoller built the winery with conservation and preservation in mind. The winery features gravity-flow technology, and it was the first in the world to receive LEED Gold certification, which means it is sustainably built and environmentally friendly.
The 4,000-square-foot tasting room is a stunner, with floor-to-ceiling glass garage doors that are opened in nice weather. You feel like you’re sitting in the vineyard. The south-facing roof is covered with solar panels. As you sip your wine you look out to the hillside vineyard. 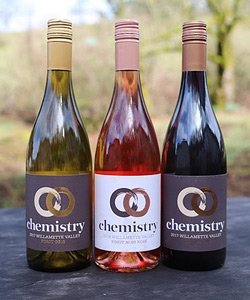 The property covers 373 acres, with 210 acres under vine at elevations ranging from 220 to 640 feet. Surrounding mountains protect the vineyards and create a warmer microclimate. It is the largest contiguous vineyard in the Dundee Hills region. Melissa Burr is the vice president of winemaking and Kate Payne-Brown is the winemaker.
The vineyard is divided into 101 sections, planted in pinot noir, chardonnay, pinot gris, riesling, tempranillo, syrah and pinot blanc. The vineyard is primarily known for its six clones of pinot noir and three clones of Chardonnay.
My wife and I visited the property with friends four years ago and rented one of the Stoller guest houses set among the vines. The guest house we stayed in is one of three available to rent. All are set in the vineyards and provide a memorable wine experience.
The winery was named 2014 Northwest Winery of the Year by Wine Press Northwest, Oregon’s Best Tasting Room by USA Today, and one of Oregon’s Most Admired Companies by the Portland Business Journal.
In 2008 the Chehalem vineyards and winery became certified sustainable by LIVE, a group that supports environmentally and socially responsible wine growing. Katie Santora became winemaker in 2018.
Last year Peterson-Nedry decided to concentrate on his vineyard and sold his share of the Chehalem winery to Stoller. So now Bill Stoller runs both Stoller and Chehalem as well as a couple of other brands. It is a seamless transition as both families share values such as sustainability and innovation.
The Chehalem vineyards are in the Chehalem Mountains, Ribbon Ridge and Dundee Hills viticultural areas in the Willamette Valley.
Chehalem became the sixth Oregon winery to achieve B Corp Certification, which assesses companies to ensure they meet the highest standard of verified social and environmental performance, public transparency and legal accountability. 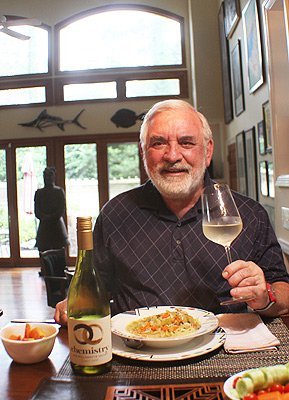 Goes with: We had this lively wine with homemade chicken soup, a dish I’ve had a lot of recently because it’s helping me to lose weight. (9 pounds in three weeks)
The rich, full flavors of the wine nicely match the savory tastes in the soup. I fill the soup up with a lot of chicken, carrots, celery, green onions, parsley and thyme. I even reused a beer-can chicken by tossing the carcass and some of the meat in the pot. It gave the soup an even richer flavor.
We eat a lot of leftovers in our house because it is a chance to have homemade meals over several days while cooking only once. Soups and stews taste better with each serving.
I also like tradition. The chicken soup is the same soup my grandmother and mother made, with a few minor additions, such as thyme. It brings back great memories when I have a bowl of this soup.
If you have questions about wine email them to dennis@bottlereport.com.