I ‘ve lived in Augusta for almost 30 years now and enjoy living here. But I yearn to go back and explore Virginia again, the way I did as a news photographer for the Roanoke Times. The people, the scenic beauty, the history and now the spirits.

This past Memorial Day Weekend our family took a ride on the J-611 steam train in Roanoke then spent a day traveling to the D-Day Memorial in Bedford and to Thomas Jefferson’s Poplar Forest. On that day excursion I saw a flyer for the new Virginia Distillery that was opening in Lovingston, Virginia. I still have it on my desk. Lovingston brings backs memories.
I remember traveling up US 29 with my camera and a reporter to a little winery near Lovingston that was started up by a Wall Streeter who gave up the big city to live a dream. That would have been around 1987. That little winery is now called Mountain Cove Vineyards which is considered Virginia’s oldest and makes some excellent wines. Back then there were only 25 bonded wineries in Virginia. In the early 90’s I visited nearby Oak Ridge Estate for a wine festival with my mother. We listened to John McCutcheon perform while sampling local wines. All sweet memories.
I’m always looking for something that takes me back to great times and great memories of Virginia especially if it’s tied to BottleReport. On that day we didn’t have time to swing up from Poplar Forest so I thought, some day I’m headed to Lovingston.
I haven’t made it there yet but as luck would have it I was offered a chance to try some of the first whiskies that Virginia Distillery has produced. They released in the Fall two distinctive whiskies that, as their literature says ” is a culmination of Old World and New World whisky making.” Cider Cask Finished Virginia-Highland Whisky and Port Cask Finished Virginia-Highland Whisky.
The backbone of these is the 100% malted barley whisky they produce on site. This single-malt spirit is blended with an aged whisky from Scotland before aged in used cider casks and port casks from local cideries and wineries. That Old World influence is not just the whisky from Scotland but from the Scottish consultants who have helped them develop their brand and product.
I have been sipping these for some time. I’ve used them to celebrate finishing a project, relaxing after a long day, enjoying family and friends over the Holidays.
With so many of my friends drinking nothing but bourbon or corn whiskeys I don’t have many chances to venture into the malt spirits. These were gift from Heaven. I have to say I’ve really enjoyed sipping on these two. I keep trying to convince myself which one I like the best.
Tonight, I like the Cider Cask Finished the best. This is Batch #2 which used barrels from Potter’s Craft Cider, in Free Union, Virginia. I think the influence from their Scottish mentors is apparent with every sip. On the nose I sense apples. It takes me back to Jerry Brown’s old farm in Daleville, Virginia, where we would pick apples from his one apple tree and take to a friend’s house to grind and squeeze.
A hint of vanilla. I could almost swear a hint of dried cinnamon. When I take a sip I get a rush of apple cider flavors that it is short lived. Then that roasty, peaty flavors of a single malt take over. I say flavors of apple cider but understand I’m not saying this tastes like apple cider-flavored whisky. I’m looking for the apple cider influences and find it but it makes for a subtle experience that makes you want to sample some more.
It’s nice neat, a sliver of ice or… I will probably be tarred and feathered for saying so.. but with some crushed ice. I love this whisky chilled. As the ice starts to melt the flavors change every so slightly. I think the caramelized wood sugars start to stand out more as the ice slowly melts. The bite of the whisky is mellowed. That single malt flavor is never far behind.

The color in the bottle is light straw. In the glass it has only a hint of color.
Okay, maybe the Port Cask is my favorite. Or at least it was last night. I keep changing my mind. I’m not sure what I was expecting. I thought this would be the “sweetest” of the two. But that’s based on some very dark, sweet ports I’ve had over the years. (They describe them as Virginia-Style Port barrels. I’ve never had a Virginia Port so I’m not sure influences to look for). The port barrel I think brings out more of the single malt quality. I tried not to taste them on the same night because I found myself liking one over the other but it all depended on what order I tasted them. The first was always the best.
This is Batch #5, aged 10 months in port barrels from King Family and Veritas Vineyards. The aroma … I have to agree with their sales materials… has hints of raisins. The toasted oak of the barrel, although second use, is apparently on the nose. Their tasting notes say there’s cocoa on the palate but on alternating sniffs I switch between cocoa and raisins.
On the palate the single malt jumps out especially on the finish. The oak influence is there. When taken neat the finish is much softer than I would expect. With a sliver of ice hints of toffee become apparent. I’m still trying to decide if I prefer this served slightly chilled or at room temperature. But either way I like it neat.
I have to admit I love the color of the Port Cask as it sits in the bottle. The label has a copper colored text against a black background. It makes the whisky look more copper colored than it really is (and hard to photograph). In the glass the color is much lighter with a slight tarnished copper color.
I could not in good conscience mix these whiskies with anything other than ice or water.
Virginia Distillery Company has been in production for two years now. As with most distilleries you just don’t produce alcohol then start selling your best spirits. Most clear or white spirits taste just about the same to some palates (although the difference between corn and single malt is usually pretty distinctive). It takes years for fine whiskies to barrel age into the products that a lot of people want. But you got to pay the bills. Some just sell “white lightning” until they get “brown” spirits ready.
Virginia Distillery Company has produced these cask-aged spirits while they wait for what will probably be their flagship single malt to finish. They are using ex-bourbon barrels, sherry and re-toasted wine casks to mature their single malt. They expect to” release this whisky in three to six years’ time from casking, with a target release date in 2019.”
So, in the meantime you have several great whiskies to choose from. The Cider Cask is the fall release of their Commonwealth Collection (for you outsiders… Virginians don’t call it the State of Virginia, they call it the Commonwealth of Virginia). Their spring release is a Chardonnay Cask Finished Virginia-Highland.

I see they’ve added a new line called Brewers Batch just 4 days ago. The series uses barrels from local craft breweries to age their Virginia-Highland Whisky. Batch Number 001 is using barrels from Three Notch’d Brewing. Three Notch’d used Virginia Distillery Company‘s whisky barrels to age their Wee Heavy Stage Road for several months then sent the barrels back to Virginia Distillery for 12-months of aging. Sounds pretty interesting.
Both whiskies are 92 proof. Of course they use water from the Blue Ridge Mountains which is of course the best water in the world (according to my late mother). They use U.S. malted barley that is milled in their 1920’s Boby Mill, which is one of a handful of mills in the U.S. that splits the grain into three parts in producing the grist.
Eventually the “wash” or the liquid product of the fermentation process, is transferred into one of their copper pot stills that were handmade by a specialty fabricator in Scotland. They use steam to heat the still to keep it from contaminating the spirits like direct heating will. Then it’s off to cask aging.
Their Lovingston facility produced 1,000 casks in 2016. At full capacity they will be able to produce 8,000 casks or 350,000 4.5 liter cases annually. They have a visitor center that features the Virginia Whisky Experience that includes a whisky museum and video and production tour. Daily tours can be booked online (the full tour takes 75 minutes so leave plenty of time in your trip). Tastings are available plus you can purchase some of their spirits including 375ml bottles. They are located in Nelson County, off Route 29 in Lovingston. (That’s about 30 miles south of Charlottesville in Nelson County. If you are going skiing at Wintergreen you got to check it out).
The distillery’s founder, the late Dr. George G. Moore, unfortunately didn’t get to see his dream of opening a single malt distillery come true, having died before it was opened. A native Irishman, he came to the U.S. in the 1970’s and spent many years building successful businesses in the U.S. and Ireland. In 2011 he established Virginia Distillery Company. Now his son, Gareth Moore and his wife, Maggie Moore, carry on the dream.
Currently their Virginia-Highlands releases are available in Georgia, Massachusetts, Connecticut, New York, New Jersey, Maryland, DC, Virginia, Illinois and Michigan and are available on www.reservebar.com.
The Cider Cask Finished is $64.59 and the Port Cask Finished is $57.49 for 750ml.
So, it’s gonna be a few more years before their Virginia Single Malt is ready. In the meantime you’ve got several great whiskies to tide you over. Cheers. 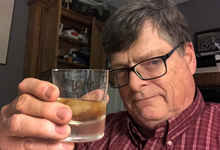