Share
Share on Facebook Share on Twitter Pinterest Email
C raig and Beverly Calvert presented another outstanding wine dinner at Calverts Restaurant Thursday night.
They had a packed house for the special dinner paired with wine from Sherwin Family Vineyards. Everyone knew they were in for a special treat because Craig seems to rise to the heights of culinary creativity when he has a wine dinner with special wines.
The dinner also was a fund raiser for the Augusta branch of the American Heart Association. Attendees could make a donation or get on the mailing list to keep up with what the Heart Association is doing.

Two other events added to the fun of the evening. A physician who is retiring from the military after 25 years received the special Patriotic Pour gift pack which includes a bottle of Sherwin Estate Cab in an etched American flag bottle and four etched Riedel wine glasses. Another lucky diner won the same gift pack during a drawing.
The Sherwin wines are special, among the best in Napa Valley, which means they are among the best in the world. Patriarch Steve Sherwin was there with his son Matt. This time they didn’t talk about the wines, probably because the tasting spilled over into two rooms so it was difficult to speak to everyone at once.
But Steve and Matt had been to Calverts for a wine dinner last year, and I have visited their winery, so I’ll fill in a few things about the wines.
Steve and wife Linda bought property on Spring Mountain in 1996 after he had spent 30 years as a builder and developer in the San Francisco Bay area. They were looking for a place to raise their three children and for something less intense than the building industry.

He said he got some help from his mentor, whose family has had five generations of grape growers. He must have learned a lot because the wines are spectacular.
They released their first wine in 1999, and have been getting praise from all sides ever since.
Friday night we started with some Duc de Valmer sparkling wine to go with some tasty appetizers. Sparkling wine is a great way to get any gathering started. The Duc de Valmer is a dry, refreshing sparkler from the Merignac region of France. It is much less expensive than Champagne, but it is a wonderful pour.

Lobster tomato bisque with 2017 Sherwin Family Vineyards Rosé.
The bisque was heavenly, a smooth, snappy soup full of rich lobster and tomato flavors. The bisque came with a whole crawfish in it, and that had a great flavor as well. It must have been cooked separately from the bisque because it had its own unique spicy flavor, and it was delicious.
The Rosé was dry, crisp and with great body. It’s made with Cabernet Sauvignon grapes, which is unusual for a Rosé. This shows a dedication to this wine because winemakers usually use all their Cabernet grapes for Cabs or Cab blends. Those wines fetch much higher prices than Rosé.
The wine was great with the bisque, with enough body to stand up to the flavorful soup, but it didn’t overpower it either. It also would be great for summer barbecues or sipping on the porch.
Second Course

Scallops, shrimp, clams and mussels with creamy angel hair pasta paired with 2016 Carneros Chardonnay.
The seafood combo was another fantastic dish that paired well with the wine. It looked like each item was prepared separately and then put on the plate with the pasta. The flavors all were over-the-top.
Most of the Sherwin wines come from estate grapes, but the cool-weather Carneros is a great place for Chardonnay, so Sherwin buys his grapes from growers there. It has a rich, lush flavor, but I would still call it a crisp Chardonnay, with good balancing acidity. There is just a touch of oak but it is not an oaky, buttery Chardonnay. Half the grapes are fermented in stainless steel tanks, and half in neutral French oak.
I think this would be a good wine with all kinds of seafood, or for just sipping on the back porch.
Third Course

Smoked pork loin with peach jam and maple roasted carrot salad paired with Cellar Scraps #11.
You could taste the smoke and heat in the pork, and the rich, warm wine covered the flavors perfectly. The pork was a little too dry, but otherwise everything in this pairing was perfect. The peach jam and maple carrots added a nice counterpoint to the spicy, smoky meat.
The Cellar Scraps is one of my favorites. I have had some in my cellar ever since some good friends and I visited the Sherwin estate several years ago. We loved the wine, the collection of antiques inside and the bocce ball court outside. The tasting room sits on top of a nice hill on Spring Mountain complete with a patio looking out to the vines.
Cellar Scraps started out with a blend of the estate Cab left over from several vintages with some other grapes added. Now they still use a portion of the estate Cab, and they source some Syrah, Petite Syrah, Merlot and Cabernet Sauvignon to blend with the estate Cab.
They don’t put vintages on the bottle because the wine comes from several years. The wine poured last year was from blend number 9; this year is was number 11. It is aged in 100% French oak and usually is at least 70% Cab.
It is a rich wine with dark fruit flavors and a velvety mouthfeel. It will pair with a wide variety of foods and not overpower some lighter dishes.
Fourth Course 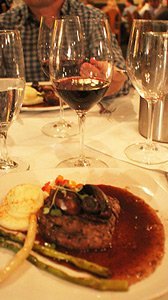 Grilled Delmonico with venison bordelaise sauce and truffle mashed potatoes paired with 2014 Estate Cabernet Sauvignon.
This was a powerful combination. The meat was melt-in-your-mouth tender and the wine was a complex Cab that just kept revealing new flavors as we drank it.
The meat was flavorful, but the sauce took it to a whole new level. The mashed potatoes were creamy and smooth, rich with the truffle flavors. This could have been a whole meal and I would have been happy.
The wine is the flagship of the winery with all the grapes coming from the 16-acre estate. The tannins are powerful but integrated well into the lush, dark fruit flavors. Everything in this wine was in balance. It should continue to develop for several years.
An estate Cab like this is especially difficult to make because the winemaker is mostly stuck with whatever nature produces. Unlike a blend where you can tinker with various grapes to get the taste right, all you’ve got are the grapes grown on the mountain. For years the Sherwins have managed to get the blend and the single-vineyard wines exactly right.
Fifth Course

Chocolate devils with whipped cream frosting and grenache topped with dark cherries paired with 2014 Sherwin Family Vineyards Reserve Cabernet Sauvignon.
The dessert was an absolute smash. The flavors and textures blended really well and brought lots of smiles to faces around the room.
I’m not a big fan of pairing dry red wines with dessert, so I couldn’t judge how well this pairing worked. But the wine was a blockbuster. It had the lush, dark fruit of the estate Cab, but a much more powerful tannic structure. It was aged for 20 months in 75% new French oak. Then it went back into new French oak for 10 more months.
I thought this wine was on its way to developing into a memorable, elegant wine. But it will benefit from several more years aging in the bottle.
0