Sierra Nevada Oktoberfest |Chico, California/ Mills River, NC
I ‘m getting ready for Turkey Day. I had to move a bunch of brews out of the little fridge to make room for the 17-pound bird we got. The turkey this year is not part of the Thanksgiving Throw Down. Only side dishes are allowed to be entered in the competition. I realized I still had some Oktoberfest brews in there and decided to have one while I researched for this year’s winning recipe. For once I might finish my fest brews before the Super Bowl hits. I’m also pretending to be working while the Mrs. Dan-in-laws are downstairs clearing a spot for the Christmas tree. 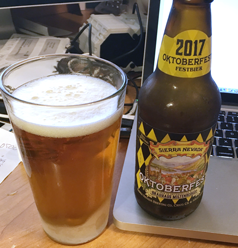 I picked out the Sierra Nevada Oktoberfest.
I’m surprised. I like this one. I drink Sierra Nevada once in a blue moon. That’s because it is so West Coast bitter that I have to be in the mood. But with them brewing near Ashville now maybe they realized they needed to mellow out a bit. I saw this one as a single at Publix and thought “how can they make a bitter Oktoberfest.” Well they did… sort of.
This is a collaboration brew with BrauHaus Miltenberger which is a German brewer. Okay, for the record. The finish is slightly bitter. This does have Sierra Nevada’s thumbprint on it. I see lots of press releases that say Sierra Nevada was trying for an authentic fest beer and I think they made a pretty good one.
To me it’s not a spot-on fest beer but it has all the touches of it except for that bitter finish which I don’t ever remember from other Oktoberfest brews (I got a few more in the little fridge I need to compare with). But I say once again… to me.
Nice forward malts. Not super foamy and sparkly so it’s smooth and full flavor. At 6.1% its not messing with you if you drink it too fast. When it warms up the bitter finish is almost non-existent. Well, almost.
Nice amber color is very inviting.
Here’s what their website says: Each year, we partner with a different German brewer to explore the roots of Germany’s famous Oktoberfest beers. This year, we’re collaborating with Germany’s Brauhaus Miltenberger, whose approach to the classic style we’ve long admired. The result is a festival beer true to their style—deep golden in color with deceptively rich malt flavor and balanced by traditional German-grown whole-conehops.
The bottle says “We’ve partnered with Brauhaus Miltenberger, of one Germany’s most highly regarded craft brewers, to create an authentic festival beer for your Oktoberfest celebration right here at home. We’re focusing on a depth of complex flavor in this amber lager, using traditional techniques to create layers of rich malt notes that remain light and crisp.”
Malty notes are abundant. I wouldn’t call this one light. Crisp from the brewing but not from added carbonation.
I look forward to next year’s brew.
Last year I won the Thanksgiving Throw Down by default. Mrs. Dan’s recipes didn’t go quite right. I won with my version of Wicked Weed’s Brussels Sprouts. I was told I couldn’t repeat a side dish so I’m thinking of a parmesan garlic sweet potato dish. I think I smell a winner.