Share
Share on Facebook Share on Twitter Pinterest Email
Decoy Merlot 2016, Sonoma County
Cost: $24-26
T o close out Merlot month I thought I would write about the winery that first made me aware of merlot. Duckhorn Vineyards has been making wonderful merlot for more than 40 years, and they seem to understand this varietal better than anyone else.
They have several labels. Duckhorn was the original and remains the place for high end wines. The offshoots include names like Decoy, Goldeneye, Migration and Canvasback that have a connection to ducks. All have their own wineries and winemakers.
Decoy Merlot 2016 ($24-26) seemed like a good wine to dive into because the winery calls itself “the everyday wine for the well-informed.”
Duckhorn Three Palms Vineyard Merlot is the top of the pyramid (and I’ll write about it on my Bottle Report blog this week), but at $98, most people won’t ever try it. It is worth the money, but for most of us Decoy is in the sweet spot of price and value.
This is a terrific wine that I would happily drink every day. It is the version of Duckhorn merlot that is ready to drink as soon as it is released. Duckhorn merlot is made for aging and long-term enjoyment.
Decoy is a gorgeous inky ruby color in the glass with enticing fresh fruit aromas. The flavors are more complex than you would expect at this price, weaving plum, ripe black cherry, blueberry and cassis together. It is an elegant, balanced wine with a lingering, pleasant aftertaste.
The Decoy is a great example of why merlot was once so popular and is becoming popular again. Merlot is a silky, luscious wine that is much more approachable than wines like cabernet sauvignon and malbec, which often have a bite or more pronounced tannins. It became so popular in the 1980s that some growers planted it in places where it didn’t do well and made lousy wine.
That led to the growth of pinot noir, which suffered the same fate of overplanting because of its popularity and the production of some horrible wine. American winemakers now are figuring out what it took the French hundreds of year to do: some grapes grow better in certain places than others.
The wine is 97 percent merlot and three percent cabernet sauvignon. The grapes come from the valleys of Dry Creek, Alexander, Knights and Sonoma.
The wine is aged in French oak, 40 percent new, 60 percent neutral.
Back in the 1980s there were two California wineries that were synonymous with merlot: Duckhorn and Sterling. The winemakers at Sterling introduced vintage dated merlot to California.
Dan Duckhorn founded his winery after visiting Bordeaux with the winemaker from Sterling. While Sterling wines were widely available, Duckhorn merlot was this mysterious whisper that everyone talked about, but no one could find.
I was living in Charlotte in the 1980s, and I could not find a Duckhorn merlot until I visited Chapel Hill and found it in a boutique wine shop. I have been a fan of their merlot ever since.
The Duckhorn is easier to find now, but the Decoy is even more widely distributed.
It’s not too late to celebrate merlot. While October has been declared merlot month, November 7 also is international merlot day.

Winery: Duckhorn and merlot are linked forever in the minds of wine lovers. Dan Duckhorn and his wife Margaret made the decision to focus his passion on making a world class merlot when they opened their winery in 1976.
He had just returned from a trip to Bordeaux where he saw what great wine could be produced from merlot, and he knew the Napa Valley could produce wines that matched the best in the world.
Dan Duckhorn is a Santa Rosa native and graduate of the University of California at Berkeley. Working his way up to become president of Vineyard Consulting Corporation, he learned about wine making from the soil up. He saw that change was coming to wine country, with consumer tastes shifting away from common varietals to higher quality wines.
After the trip to France Dan and a small group of friends founded Duckhorn Vineyards in 1976. It was one of the first 40 wineries established in Napa Valley. The 10-acre property in St. Helena later became home to the Duckhorn Vineyards Estate House, their gorgeous tasting room along the Silverado Trail.
Their first harvest brought 800 cases of merlot rom the Three Palms Vineyard and 800 cases of Napa Valley cabernet sauvignon. Both wines were big hits and the brand took off.
The first Decoy red blend came in 1985, and was so well received that the Decoy lineup quickly expanded to cabernet sauvignon, merlot, zinfandel, pinot noir, rosé, chardonnay and sauvignon blanc. All come from Sonoma County.
Duckhorn greatly expanded its holdings beginning in 1988 by purchasing seven estate vineyards on Howell Mountain and the valley floor for a total of 168 acres in Napa Valley and four vineyards totaling 153 acres in the Anderson Valley, Mendocino County.
In 2005, the San Francisco Chronicle named  Dan Duckhorn its winemaker of the year and named four of his wines to its list of top 100 wines of 2005.
Starting in 2007 the Decoy label featured a decoy carved by Richard Janson, a popular decoy carver. The current label is a painting of the Janson decoy done by Zimbabwe artist Michael Allard.
Four years ago the winery acquired a state-of-the-art winemaking facility in Hopland that allows the winemaking staff to control every part of the process.
Besides Duckhorn, the company now owns Decoy, Goldeneye, Paraduxx, Migration, Canvasback, Calera and Kosta Browne. 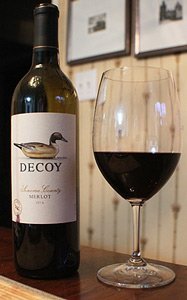 Goes With: I had the Decoy Merlot by myself one night when Teri was out with her friends. After playing golf on a rainy day all I wanted was some comfort food and some nice wine to warm me up.
The Decoy fit the bill nicely. I popped a frozen pizza in the oven, opened the bottle and relaxed. Many people don’t think of merlot as a pizza wine, but it is a really nice pairing. This was another case where the wine was the star of the meal.
The smooth, fruity taste rounds out the pizza tastes as well as any wine I’ve ever had. I had to struggle to save some wine for Teri to taste when she got home. She loved it as much as I did.
This wine also would pair well with grilled lamb, beef, duck, wild rice, mushrooms, aged cheddar and a dish seasoned with rosemary.
If you have questions about wine you can email Dennis Sodomka at dennis@bottlereport.com
0