W ine drinkers are a funny lot. We are always in search of the next best new thing. Every time a new wine is released, we hope this will be the one we have been searching for. And often we are rewarded because there are so many great wines being made these days.
But few wines have been delivering great taste and a great price for decades. Robert Mondavi Fumé Blanc is one of the rare exceptions. I have been drinking Robert Mondavi Fumé Blanc for more than 30 years, and it never fails to deliver.
It is a smooth, refreshing wine with a lot of character. Aromas of lime blossom and citrus lead to rich flavors of tropical fruit, peach and green apple. The grapes are 87 percent sauvignon blanc and 13 percent semillon from two great vineyards.

The Wappo Hil vineyard in the Stag’s Leap District gives the wine bright citrus and herbal flavors while fruit from the legendary To Kalon vineyard in Oakville adds richness and complexity with layers of mineral and floral notes. The dry sauvignon blanc style of Mondavi is enhanced by the semillon which adds complexity and smooth mouth feel.
The two grape varietals and the two different vineyard produce a great blend.
The grapes were picked by hand in the morning and gently pressed as whole clusters to produce fresh, vibrant fruit flavors. The wine was barrel fermented in 5 percent new oak and 95 percent used oak for added richness and complexity.
Then it was aged for six months in 60-gallon French oak barrels on the yeast lees. It was hand-stirred twice a month to create a creamy texture and to help integrate the flavors.
Robert Monavi went out on a limb when he created this wine in 1968. He made a complex, dry sauvignon blanc when the prevailing American style was simple and sweet. He was inspired by the Pouille Fumé of the Loire Valley in France, but made the wine distinctly California.
It was popular as soon as it was released and has remained one of Mondavi’s best sellers, along with their cabernet sauvignon.
Winery: All you have to do is say the name “Robert Mondavi” and nearly everyone will think “great Napa Valley wine pioneer.” No winery is more identified with Napa Valley than Mondavi.
The first modern winery built in Napa Valley after Prohibition, in 1966, is still a familiar sight off the main highway through the heart of Napa Valley. It should be considered a must stop for every first-time visitor to wine country.
Mondavi’s vision that Napa Valley could produce first class wines that could match any in the world proved to be right on target.
Mondavi believed great wine was part of a gracious lifestyle that included food and art. For years the winery hosted a summer music festival to raise money for the Napa Valley Symphony. He also was instrumental in the launch of the Napa Valley Wine Auction that now raises millions of dollars annually for local charities.
He promoted education of wine consumers and started a program to introduce wine drinkers to the great chefs of Europe and the United States.
As the winery grew it added wines at all price ranges and built facilities in the Central Coast region, farther south. Their labels include Woodbridge and Private Selection as well as Robert Mondavi and Robert Mondavi Reserve. The Mondavi Cabernet Sauvignon Reserve from the To Kalon Vineyard sells for $325 a bottle. Among its labels, Mondavi offers just about every varietal grown in California.
In the 1970s Mondavi and French icon Baron Philippe de Rothschild joined forces to create Opus One.
Though Robert Mondavi is long gone, his spirit of innovation and excellent quality live on. Constellation Brands acquired the winery in 2004.
The ultra modern mission style winery and tasting facility was built in 1966 and offers interesting tours. The facility was renovated and expanded beginning in 1999 and was later named the To Kalon Cellar.
Like many other wineries Mondavi practices natural farming and believes in environmental responsibility. Environmentally friendly practices include conserving soils and water, managing pests and recycling water and materials.
Robert Mondavi knew that great wines always begin in the vineyard and he carefully sought out some of the best growing regions in Napa. That allowed him to make great wine at higher prices while still mass producing quality wine at lower prices. 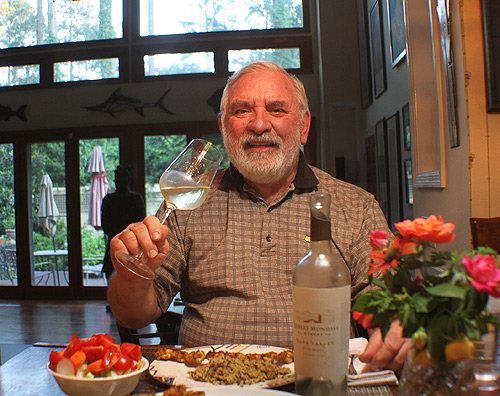 Goes with: We had this classic wine wth steamed shrimp and marinated grilled shrimp, long grain and wild rice and a tossed salad. We have been eating a lot of shrimp lately because we had brought back a lot from our trips to Edisto Beach. We never get tired of their wild-caught shrimp. For this meal we steamed some shrimp for a shrimp cocktail first course and grilled shrimp for the entree. The wine was great with both courses.
I love that you can always find a new recipe for shrimp. It has its own great flavor, but it readily takes on the tastes of the herbs and spices with which you cook it.
The rich flavors of the Fumé Blanc were perfect for the tasty shrimp, which had a little spicy kick. The flavors complemented each other very well.

Peel and de-vein one pound of shrimp.
Combine soy sauce, juice of one orange, 1/4 cup lime juice, one teaspoon of sugar, about two tablespoons of red pepper flakes, two cloves of garlic chopped and ginger (either fresh or powder).
Put the shrimp in a resealable plastic bag or a covered bowl and cover them with the marinade. Let the shrimp marinate for about 20 minutes on the counter or an hour in the refrigerator.
Put the shrimp on skewers that you have soaked in water and place the shrimp on the grill over direct coals. Cook for 3-5 minutes per side, or until you get light grill marks on the shrimp. I usually drizzle a little marinade on the shrimp while they are coking. When you finish cooking the shrimp should be crisp on the outside but not dried out inside.[/box]

If you have questions about wine email them to dennis@bottlereport.com.