I brought home the bacon Friday. But then again so did a lot of other beer lovers.
Oconee Brewing’s much-hyped Bacon & Kegs Red Ale, a bacon-infused red ale, was released Friday evening to those who were lucky enough to pre-order the 1,200 4-packs or come to the brewery to taste it on tap and take home a growler or two. This was a collaboration between Oconee Brewing and Waffle House. The label features a Waffle House-style sign whose letters have been changed to Bacon & Kegs. The backside features a small Waffle House.

The folks working behind the taps Friday night were wearing Waffle House sweatshirts. Upfront at the loading dock door they had a small tent set up where folks could stop by and pick up their pre-ordered 4-packs. According to the ladies handling the pre-orders, there was a line waiting for the 4 pm start (I missed that because I was stuck in construction traffic out on I-20). They said they were waiting for the next big line to form around 5:30 when people get off work.

With such a limited run that was not part of their usual distribution network, they decided to limit it to pre-ordering online. Since Georgia doesn’t allow the shipping of beer to the public that means people would have to come to the brewery to pick it up. Pre-ordering prevented people from driving a long way to find out it was sold out. While I was a the brewery I saw license plates from all around Georgia, one from Louisiana and one from Tennessee.

Brewmaster and co-owner Taylor Lamm said they produced 15 barrels of the infused brew, from which they canned 1,200 12 oz. 4-packs. He said the rest was on tap and wasn’t expected to last the weekend.
Bartender Bobby Craig described Bacon & Kegs as their flagship “Mean Machine Red Ale infused with bacon extract.” He said that when the online pre-orders started at 9 AM Dec. 12th half of the available 4-packs were gone in the first hour. By the eleventh hour, all were snapped up.
I purchased a pint ($6.07) and a 64oz growler ($25 for the brew and $5 for the bottle) and headed to their large tasting room to try it myself.
This has a strong red ale backbone with a prominent flavor of well-done bacon. Kinda like those dark brown crispies that are left in the pan after cooking a bunch up. The aroma is definitely bacon. The Mean Machine always has a crisp mouthfeel to it so it’s not a super smooth malty type brew. It doesn’t have a smooth mouthfeel but has what I would describe as a greasy mouthfeel. Kinda appropriate I think. The finish had a dry bite to it similar to some of the nut infused brews like a pecan-flavored ale. After I walked around talking to some tasters I realized I still tasted the bacon 10 minutes later.
I talked to Brad from Augusta who said he came over with friends to try some. He said the aroma was definitely bacon and the flavor as well. But it was different from their flagship red ale.

I saw newlyweds Devin and Craig who said they drove up from Macon for the release. They were taking a selfie in front of the Waffle House banner near the entrance. After they settled down in the outside seating area they told me they come up to Oconee Brewing on a regular basis. Devin said they were just here two weeks ago but “there has been so much hoopla about this beer” they had to come and try it. Craig said it isn’t a heavy brew but was “thick. Smooth but thick. I can smell the grease but can’t really taste the bacon.” She said this was a “perfect fall beer.” She added that it reminded her of a black tea-infused brew. Maybe that’s the little sharp finish I was tasting.

As I wandered around inside the tasting area I noticed the tall round skinny bins holding up some of the tabletops. I recognized them immediately. Those are the cotton yarn barrels that the cotton mills used to hold the cotton rope-like yarn before it was spun into tighter thread for weaving. My dad was in the textile business. We had one of those in our house as a dirty laundry hamper.

They have kept the old cotton warehouse feel in the tasting room. The building housed the Chero-Cola bottling plant until it closed in the 1930’s. After that, the local cotton mill took it over as warehouse space.
If you haven’t been to Oconee Brewing in Greensboro it is definitely worth a road trip They are located at 202 N. West St., Greensboro, GA. Their number is 706-920-1177. They are open for tasting Thursday, Friday and Saturday. Check their website for times.

As for my growler, it was finished off by the Beer Brothers Saturday night. We had our first actual burn-pot since the Pandemic started. We’ve been doing our weekly burn pot drinking sessions via Zoom. This week we sat around the fire and sampled this and some other brews.
The general consensus was that it was a good brew with a very distinct flavor we’ve never tasted before but Beer Brother Brett added “I read where some guy drove from Texas to get a 4-pack. It’s good but I wouldn’t drive from Texas to try it like some folks.” 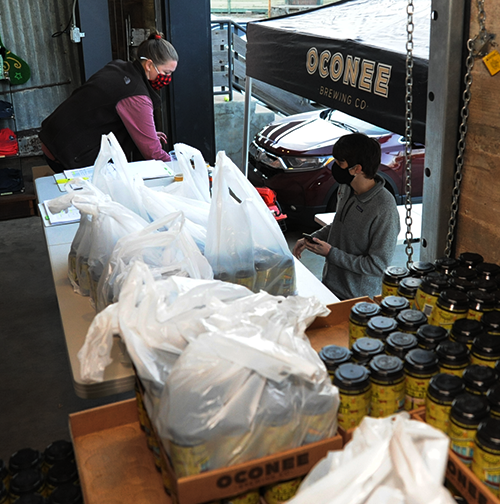