Share
Share on Facebook Share on Twitter Pinterest Email
7 Deadly Zins 2017, Lodi
7 Deadly Cab 2018, Lodi
Cost: $15-17
W hen 7 Deadly Zins was released in 2002 I thought it was a devilishly clever marketing campaign. A word play on the seven deadly sins, the grapes came from seven old vine zinfandel vineyards.
The best part was how good the wine was. I have had 7 Deadly Zins many times since then, and it has continued to be a reliably excellent wine.
Now there’s a new 7 Deadly in town, and while the name isn’t quite as catchy 7 Deadly Cab also is a terrific wine. 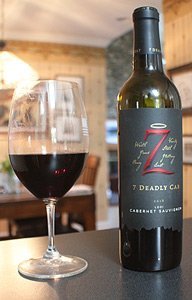 The cab is full-bodied, full of ripe fruit flavors. In the glass it is a deep, dark garnet, almost opaque with vanilla and mocha aromas. The first sip brings flavors of ripe blackberry and dark fruit. It is a dry wine, with a big, smooth mouthfeel and a long finish.
7 Deadly Zins is the best-selling Zinfandel in America, and with good reason. Every vintage seems packed with jammy fruit and full of mouth-watering flavor. There also is a 7 Deadly Red, a red blend of Zinfandel, Petite Sirah, Cabernet Sauvignon and Merlot. The Cab and the blend follow the fruity, robust style of 7 Deadly Zins.
The Zinfandel is beautiful in the glass, an inky dark, almost purple color. It is an aromatic wine, with hints of dark fruit, leather and oak wafting out of the glass. Complex flavors of jammy dark fruits, currants and toffee follow, with a lingering spice finish. It is a round, layered wine with a silky mouthfeel.
7 Deadly Zins grew out of the imagination of Michael and David Phillips, who blamed their Catholic school upbringing for the name of this wine. The label has a stylized 7 that also looks like a Z with a golden halo over it. The back label has some funny bits about hedonism, lust and pride. It all makes for a memorable package.
The grapes are grown in Lodi, which is known for its great Zinfandel. The Mediterranean-like climate with warm days and cool nights also is ideal for Merlot, Chardonnay, Cabernet Sauvignon and Sauvignon Blanc.
In case you have forgotten, the seven deadly sins are wrath, greed, envy, vanity, sloth, gluttony and lust. But be careful. Drinking this delicious wine could lead you to committing several of those sins.
Winery: The original 7 Deadly Zins sprang from the creative souls at Michael David Winery, known for premium quality wines and clever, eye-catching labels. The roots of Michael David Winery go back to great great grandfather Andrew Harshner and his wife Lucille who homesteaded 160 acres near Lodi, CA, following the Civil War in the 1860s.
Vegetable farming led to fruit farming which led to grape growing which led to wine making. David started his first winery in 1984 and was joined by his brother Michael five years later.
A few years ago Michael David Winery sold the 7 Deadly Zins brand to The Wine Group.
“We think it’s a great thing that The Wine Group will be more involved in Lodi,” David Phillips told Wine Business Monthly at the time of the sale. “It’s great for Lodi, for the growers, for everybody.”
The Wine Group includes such brands as Franzia, Cupcake, Stave & Steel, Almaden, Benziger, Big House Wine Co., Concannon, Flip Flop, Imagery, McManis Family Vineyards and Trapiche.
The Wine Group originated within Coca-Cola Bottling of New York when consumer product companies were getting into the wine business. After a leveraged buy-out in 1981 The Wine Group became a privately held company owned by its executives in 1984.
The company continued to grow through acquisitions and by creating new brands. Looking at their past practices, I would say the clever marketing and great wine at 7 Deadly Zins will only intensify under The Wine Group.
Goes with: We had these wines with pulled pork, a dish that I have loved since I moved South nearly 43 years ago. There are as many ways to make it as there are stars in the sky, and I love them all.
But the pork we had with the 7 Deadly wines could be the best I’ve ever had, made by my good friend Mark Rhodes. Mark is sort of a Renaissance man. Not only does he do wonders on the grill, he and Cindy create amazing fancy food, he has a prolific vegetable garden, he’s an expert on whiskey and he makes world class furniture and wine cellars through his company in Aiken, Vinworx.
Back when we could safely socialize, he and Cindy would host outdoor dinner parties with the most amazing food and wine. One time he smoked all kinds of pork on his huge grill that he parks in his back yard. The best of the night was the pulled pork, and he gave us some to take home.
I have won awards for pork on the grill, but I would rank Mark’s right up there with mine, and the pork from Clint Bryant, the other great outdoor chef I know.
I froze it and pulled it out last week, and it tasted like it had just come off the grill. Smokey and spicy and full of juicy flavor, the pork made my whole week. I had the meat covered in sauce on a bun and served with sweet potato puffs. It was a feast.
Both the Cab and the Zin are versatile and would pair with all kinds of beef, lamb, game and poultry.
If you have questions about wine send them to dennis@bottlereport.com
0